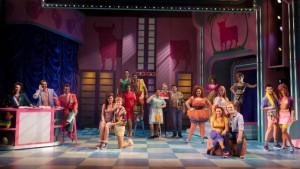 Not one but two pairs of star-crossed lovers; a case of mistaken identity; unrequited love; hero with a fatal flaw…no, this is not Shakespeare. Nor, for that matter, as I had fondly imagined, a biography of Wham. My companion reckoned it was most like Benidorm in fact. I’d have called it a Summer

Pantomime myself. Likewise, ‘hero’ is stretching it a bit, although it feels quite mean saying this because star of the show, Joe McElderry (mc Garry), seems such a nice person; indeed, first I knew of him was when a devoted fan sent me reams of poems about him. Alas, here, he is as out of his depth as a non-swimmer in an infinity pool, and it’s a shame they didn’t focus on his wonderful singing, leaving the dancing, comedy and acting well alone. Although, he could have taken lessons from Kate Robbins who effortlessly steals the show as the maid, Consuela: Norah Batty mashed with Mrs Overall.

Anyway, off we go, to Spain, because when Lorraine jilts Ollie on their wedding day, best friends Tracey and Andrea decide it would be a shame to waste the honeymoon. Surprise, Surprise – no, sorry it’s Blind Date which is featured as part of the on board entertainment – Ollie’s mates decide he needs a holiday to cheer him up. Yes, of course you can see where this is heading; no cliché is left unturned but at least there are quite a few nifty jokes to perk things up. The eponymous hotel having recently changed its name, owners Serena and Robert are waiting for the inspector; if he gives them a good report, they could beat their nearest rival and win an award. So when swanky Christine turns up, asking loads of questions in her very posh voice, it’s obvious who she is. Just as everything perfectly obvious to the audience, while the characters remain blissfully, incredibly, unaware. So the protracted fancy dress scene does come in quite handy.

And the cast appears to be having a high old time, full of joyous energy. Both of Lorraine’s BFFs get a fair crack of the whip: practical, bitchy Andrea (Tara Verloop), and Rebecca Mendoza, giving it her considerable all as Tracey, especially when tackling The Lion Sleeps Tonight – and Ollie. But while one mate, Blaine (Kane Verrall) stands out as a flamenco dancer and Garry’s love interest, Rory Phelan’s Drew sees little of the action. Back on the other side, Emily Tierney’s Christine is yet another one sashaying around but she is ultimately outclassed by Serena (former Sugarbabe, Amelle Berrabah) as she tries to sink her claws into Robert; Neil McDermott is clearly much sought after, and not just by Miami Vice. As for Kate Robbins, well, even if you can’t tell the difference between her Toyah Wilcox and David Bowie, her impersonations are mostly hilarious and she is first class in every scene, in every skill: acting, singing and dancing and an absolute whizz when it comes to comedy.

Everything and everybody is reconciled at the end, naturally, but here’s the thing: it’s not really the play, is it? You’ve come to enjoy the music, and you’ve come to the right place for a thoroughly entertaining evening.