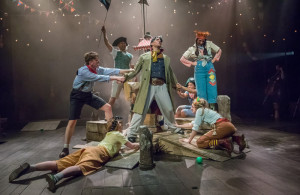 It’s a wonderful thing, children’s imagination, truly fantastic, and boundless. And for adaptations of this book, you certainly need to channel your inner child. That said, last time I saw a production, it was set in the attic; this, written by the acclaimed Bryony Lavery, has the undoubted advantage of

being in the open air, although, and yes, churlish to complain, under a blazing hot sun.

And hats off to the imagination too of the designer, director et al with the setting, a wooden multi-storey platform as island/tent/ boat centre stage, the house, part of the seating at the back. Such a small space, yet the entire theatre is utilised, every inch literally brought into play. And with amazingly inventive touches such as deftly wielded bird marionettes and boats made out of wheelbarrows, not to mention some exciting audience participation in the battle scene. Impressive, as were the cast, throwing themselves into the roles, acting and musical, yes, with all the whole-hearted enthusiasm of children.

Ah, them were the days when youngsters could roam far and wide, and deep, with the action taking place on and around a lake. I still remember being acutely disappointed after reading Enid Blyton, thinking that not only were stories made up but so were adventures. Got that wrong. So, plenty of fun lies in wait for the intrepid Walker family on their holidays, encountering pirates, castaways, peasants (as it were) and a pair of Wild Boys. Derring do mixed up with mistaken identity, with everything turning out for the best, this is a classic children’s tale.

For a book published in 1930, a lot of the Amazons’ gesticulation seems anachronistically remininscent of a rapper, but more surprising is the prominence given to Nancy and Peggy, every bit the equal of the boys. Well, John. As indeed are the practical Susan (Lucy Keirl) and lively, if re-named, Tatty (Claudia Grant); you kind of wonder whether they’ll end up as bossy as Mrs Dixon, amusingly played by Catherine Cusack who ascribes her feelings to her dour, long-suffering husband (Dominic Rye).

The Swallows, encouraged to be independent and not ‘duffers’, seem like a standard middle-class family, ever so polite and obedient (mostly). The rival Amazons however live up to their name, if you can say that of tomboys, being kind of Bohermian, under the care of their uncle, Captain Flint (James Weaver). He’s obsessed with writing his memoirs, the reading aloud of which provides much of the humour, along with the gawky innocence of young Roger (Mitesh Soni), and the chats between sensible Mother (Laura Dagleish) and the quivery Nanny ((Ian Harris). The most grown up of all is the splendid Callum McIntyre, holding everything together as John, even when basely accused of lying. One of the pleasures of these productions is watching the actors undertake different parts; for example, heroic Claudia Grant as beastly Caliban, while Mitesh Soni plays a child, Roger, then childish Claudio.

And it’s nearly as much fun to write about all this as to experience something so charming, as sunny as the day is long. So you too could hoist the Jolly Roger (John, Peggy etc), but set sail you must for this annual delight, courtesy of Grosvenor Park Open Air Theatre.