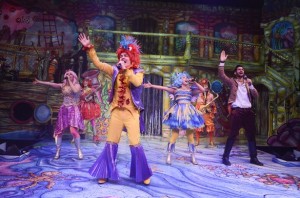 Interesting to visit a show later on the run rather than on the Press Night, which always has its own shall we say peculiar atmosphere, heady with anticipation, and all the more so with looking forward to Xmas. The danger is the possibility of running out of steam and energy (and puff, if it’s

Aladdin…). Not here, of course not here, with those well established ringmasters Adam Keast (Captain Nemo) and his one true love, Pearl (Francis Tucker) in charge of something which is as entertaining as a three ring circus. Yes, it’s full of golden oldies as usual (if it ain’t broke, don’t fix it, unless that’s going to raise a laugh), though be warned, it isn’t just the sea which is blue this year; the innuendo filled banter frequently comes pretty damn close to the bone.

Anyway, the plot, you will be relieved to learn, does not adhere that closely to the Hans Christian Andersen original; in fact there’s blatant borrowing from Cinderella for one thing. Well, two, if you also briefly count Sleeping Beauty. But it does get pretty complicated so let’s just say that the star struck lovers, delightful heroine Marina and her Prince Charming, Hal, are torn asunder and must be reunited, and everybody has to stop the evil Invanna from destroying the world. Amongst other things; mistaken/mutliple identities reign supreme.

And did you ever realize just how many pop songs have sorta nautical themes? The band of multi-talented members, as ever, perform wonderfully in every area. With the acting, two of the most comical cameos featured Danny Burns, morphing from the Codfather into Barry Manilow, and even more striking, as Hank to Elizabeth Robin’s Marvin, shadowing (oh yes they were…) Bonny Prince Hal.

However, the opening was unfortunately marred: hard to settle down into the story when the dialogue is largely inaudible; it almost felt as if Imelda Warren-Green had far too much on her plate, her main role being a kind of Fairy Godmother, Tiger Blue. For instance, she also plays ‘Cliff’ but no idea whether that’s Richard or rock. Meanwhile, Stephanie Hockley was a tad too giggly as Marina, making her seem a wee bit inspid, in the shadow of the tall, dark and handsome Hal (Jamie Noar), especially the way he played the audience, showing an admirable sense of the ridiculous: a reality celeb with a neat dash of self-deprecation,

Both heroine and villainess certainly have glorious singing voices, but Lucy Thatcher tended to focus on hamming things up on the comical side to the detriment of the sinister rather than aiming for a balance. In fairness, Marina proved very quick witted with improv in response to audience, well, comments rather than heckling, although prone to corpsing, opposite Tom Connor (Flounder) – and who could blame her? In a sense, he’s a victim of his own success because all the ingredients are there as regards leading man material, renaissance man rather, being a skilled musician into the bargain. But he is simply brilliant all round at comedy, from facial expressions and the physical to getting the most laughs from the dialogue.

And the ridiculous filters through the entire production, liberties being gleefully taken right, left and centre; bizarre monsters, vehicles and locations etc. It also imbues most of the costume design, vivid and startling as an acquarium full of the most exotic fish. So does this, the latest in the long line of rock and roll pantos, sink or swim? They say it isn’t Christmas until you’ve seen the Everyman panto – and it goes on to really liven up January as well.