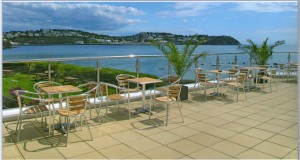 £1,000 first prize
plus free weekend at the poetry festival, (19th – 23rd Oct
2017 ), including accommodation and Festival Pass.
£400 second prizeplus a free Festival Pass.
£200 third prizeplus ticket for the
Festival Supper for two.
ENTRANCE FEE: £5.00 per poem, or 5 poems for £20.00.
Winners to be announced at the PRIZE-WINNERS’ PARTY on
Saturday 21st October, at the Torbay Poetry Festival, Livermead Cliff Hotel,
Torquay, Devon where short-listed poets will be invited to read their poems.www.torbaypoetryfestival.co.uk/competition

Judge: Penelope Shuttle has made her home in Cornwall since 1970 and the county’s
rich history is a source of inspiration. So is the personal and artistic union Shuttle
shared with her husband, the poet Peter Redgrove, until his death in 2003.
Shuttle’s poems are full of elemental imagery: water, earth and, in particular,
weather. Whilst her subject matter can be everyday , she refuses to be bound by
anecdote, drawing instead on myth and dream to transform reality: in her work
“the ordinary seen as heavenly” becomes the norm. In her role as witness,
Shuttle’s language takes on a ceremonial quality, like the difference between a
coin used to buy bread and a coin thrown into a well as an offering.