You are currently browsing the monthly archive for December 2014.

OK, seen one panto, it feels as if you’ve seen them all… so here we are in old Peking, via Egypt, Arabia and England, both Regency and Victorian. Pretty colourful, obviously, particularly if orange is supposed to be good for you; scenery and costumes: orange and red, orange and turquoise – you get the picture. In fairness, the scenery otherwise looks anime inspired, and attractively stylised for the posh bits.

That would be the Emperor (Pete Price) and Princess Jasmine(Leanne Campbell). She’s blonde, which kind of says it all, and a good match for Aladdin. Ray Quinn’s picture makes him look like Britain’s Most Wanted, which he probably is of course, and making the most of his all singing, dancing etc role but perhaps a little bit bumptious. It’s Ben Engelen as brother Wishy Washy, who really shines with all his hard work keeping the audience amused, whole-heartedly helped by panto stalwart Roy Brandon (Widow Twankey) and Adam Curtis (PC Pong).

Warren Donnelly as Abanazar unfortunately takes a while to get into his stride, and not half as ferocious as your average villain of the piece, or the panto. Luckily, Claire Sweeney saves the day, the Genie of the Ring neatly switching between glamourpuss and sourpuss (lots of tetchy observations).

And plenty of the renowned Scouse humour – oh yes, there is, from local references, shrewd observations to quite a lot of funny jokes.

Audience participation tends to sound sedate but everybody joined in with riotous enthusiasm; for a hugely entertaining night out, they’d no doubt award the show 4*, if not 5*. 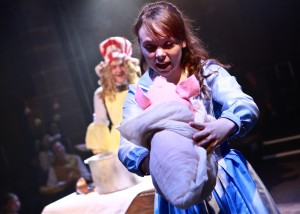 Never mind ‘There’s Something About Mary’, it’s Alice who has kept us all entranced for so long now. But such a familiar story, what on earth can