You are currently browsing the monthly archive for November 2014.

END_OF_DOCUMENT_TOKEN_TO_BE_REPLACED

This is my family 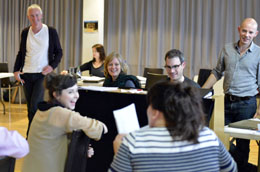 What makes this a marvellous musical is, quite simply, not just my family – it’s yours, ours, and everybody’s. After all, where would Art be, in any shape or form, without us; mostly providing the tension from contradiction and conflict, basically, proving time and again how ties do bind us.

What makes this a typical musical, all the same, is that there isn’t a big deal in the way of plot: Part 1: daughter’s competition entry describing the ‘perfect family’ wins holiday; Part II, family goes on holiday. That actually doesn’t matter though, despite missing the odd bit when the going gets chaotic, what you are enjoying is a beautifully observed, intricately woven and exceptionally funny set of oh so true to life scenes. And you cannot help but wonder how much of it is actually drawn from life…

On a largely bare stage, the whole of the back is the interior of the house which homes Nicky and Matt and their parents, Steve and Yvonne; part doll’s house, part junk shop, absolutely stuffed to the gills. It’s here where Steve’s mother, May, comes to live. Marjorie Yates’ singing voice may not seem particularly strong but it conveys her growing bewilderment, in poignant contrast with her strong faith and her sharp tongue. And here’s Yvonne’s flamboyant sister, Sian (Rachel Lumberg), parading possessions and boyfriends. Somewhat stereotypical as the anarchic sibling but essentially good-hearted, she is a positive fount of comedy.

That is something the show has in spades, particularly with Matt as a petulant Goth, voluble and inarticulate by turn; a remarkable effort from Terence Keeley. Likewise, Bill Champion as Steve, whose ongoing midlife crisis, lurches from one extreme to another, from learning Arabic to trying to master parcour. And we are at least spared the inevitability of his losing his job; that’s another story altogether, evidently; the workplace aspect just fades away.

And given the matriarch as archetype, Yvonne (Clare Burt) seems rather underplayed, although if more mother, wife, sister and daughter-in-law rather than herself, hell, that is fairly typical of most families after all. Nicky, too, may be a bit much Pollyanna at times, full of enthusiasm and inspired ideas but no tantrums or sulks, yet Evelyn Hoskins is truly splendid as the narrator, the glue helping to hold it all together. The cast cannot be faulted, performing as if this were their one passion in life; their mission.

In a long and successful career, TV, stage and film, Tim Firth has polished the knack for making something extraordinary out of the ordinary, not to mention having a real gift for technique. Heartwarming, uplifting in the blend of song and dialogue, yes, this show is another palpable hit, one which will mark the spot for a long, long time to come.