Review: Lord of the Flies

Lord of the Flies 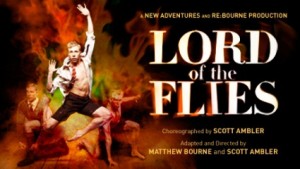 Not quite what I was expecting, but no denying that dance is probably perfect to capture this novel, all that primitive passion exploding on stage.

Such a powerful work of imagination however does require a lot of imagination to follow exactly what’s happening… although the conch is replaced by a drumstick, it is still evoked by the sound of horns, but a heavily symbolic metal door, on an island? And racks of clothes apparently veer from jungle bushes to (OK, perhaps) a sign of missing authority. At times, it’s bit too busy, with a cast of thousands, and while actions are said to speak louder than words, and the book’s sinister essence is brutally conveyed, some of its complex ideas are not clear: rather than the horrific Beelzebub, at first it seems that Simon is faced with Pinky and Perky. Nonetheless, the stark staging chills, the music is brilliant, and the choreography inventive, from the opening jaunty march to soaring music,

Oh but the dancers are exceptional. Star of the show is Layton Williams, an incredible performance as Simon, though so closely matched by Sam Plant (bullied brainbox, Piggy), Sam Archer as good old Ralph and Danny Reubens as a genuinely menacing Jack. Dan Wright is cruel bully, Roger, while victim, Leonardo Bertamini, who innocently sets off a witch hunt with his belief in monsters, is remarkable – the ensemble is made up of local newcomers but every one of the performers was superb.

A novel once read never forgotten, this shockingly enthralling version is also destined to become a classic.