So many jokes about things porcine, but so little space in a review, and there also seems to be a cast of thousands. Another problem is the

temptation to contrast and compare with the film, or rather, to remember the details, other than the basics: the purloining of an illegal pig destined to provide a slap-up meal for a chosen few.

And a suspicion that sweetness and light are possibly more of a requirement for a theatre musical. For example, the stage version of Mrs Chilvers may be less shrewish, if still so determined on being upwardly mobile it’s a wonder she ever lies down. Mr Chilvers? On screen, pretty much downtrodden but here, a man with ‘magic fingers’ as the song claims, could end up with the world at his feet. Both of them certainly manage to be thoroughly nice people without appearing bland; Haydn Oakley quietly and effectively just about keeps up with Amy Booth-Steels’ vim and vigour.

By contrast, both of the main villains, the obsessive meat Inspector, Wormold (Tobias Beer) and the stuck-up, boorish Dr Swaby (Kit Benjamin), along with Mother Dear (played by Sally Mates as if she’s worried about failing a Pantomime Dame audition), are little more than caricatures; grotesque is not always a guarantee for giggles.

And with a cast of 17, is it Matt Harrop as Mr Allardyce? A right soppy date, with his pet topic providing much of the humour, as he gets bright eyed and bushy tailed over Betty the pig
. 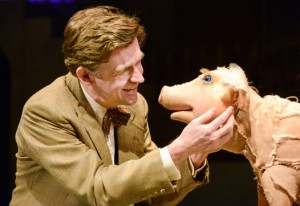 Plus spot on cameos from Kate Robson-Stuart as Princess Elizabeth and Joe Maxwell as Prince Phillip, with a real sparkler from Lauren Logan as the puppeteer.

Set mostly on the Parade, the shops where Mr Chilvers longs to have his surgery, there are a number of crafty scene changes: dining room interior; farm and a bit roaming over the hills and far away. Some have quite an impact, such as the fate of the dancehall, while a couple are surprisingly near the bone, given this is the austere 1940s.

Actors these days are called upon to possess an arsenal of skills, with manipulating marionettes apparently the greatest calling this year – indeed, along with small scale musical adaptations. Nearly every song here is flawless, clever as well as catchy. Once again, an impressive cast displayed all round talents with many of the musical scenes being regular showstoppers, even if some featuring the women looked like Fosse getting to grips with the Stepford Wives.

Nonetheless, the atmosphere of those dreary years is well captured, though you can’t help but wonder that the Chilvers hanker to settle down in a place so full of such unpleasant, greedy, snobbish people, dependent on backslapping and backhanders, and forever stabbing people in the back. The war may be over yet class warfare does not lay down its weapons.

One quibble: nice song though very curious about the title; why the change, and why dependent on something so whimsical? But of course, it is a prime piece of entertainment, and a charming show; the Playhouse and the Everyman have treated us so well with an excellent selection over the year, and this a cracking choice to conclude the Summer Season.