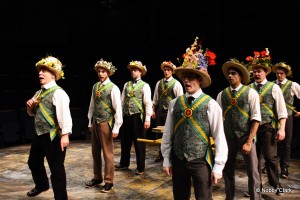 Oh what a lovely play. It’s a given that literature depicts the Summer of 1914 as idyllic but this tale of Lancashire villagers in Wakes week,

celebrating the Rushbearing Festival, is a nigh perfect example. Inevitably, the bucolic charm of the first act is followed by the grim reality of the outbreak of War but the two are well balanced – rather like Herbert Tweddle as the Jockey, atop the actual Rushcart which is assembled in a splendid finale to the first half. We are also treated to a fine display of Morris Dancing, beautiful songs, lively dialogue and a spirited cast who are joyfully involved, whether drinking and courting or planning and arguing.

The plot is firmly earthed, and lovingly tells us more about the villagers, their friendships and rivalries, workplace and leisure, virtues and vices. By comparison, the thwarted marriage plans of Frank Armitage (Darren Kuppan) and Mary Farrar (Emily Butterfield) may seem a somewhat thin device, with her father and his mother at loggerheads; so much so, a double weeding looks to be on the cards. This is resolved with such speed, their nuptials opening the second act, it sets alarm bells ringing along with those for the wedding. Likewise, when comedy at the forefront is superseded by the tragedy of The Front, Frank and Mary’s next meeting should come as more of a shock; a done deed would have more impact rather than having special effects as it were put together in front of our eyes. Nonetheless, whilst Rutter is of course, well, just Rutter, as John Farrar, over the top Squire and ferocious patriarch, the scene where he is reduced to a dignified, hopeless silence could not be bettered in its eloquence.

There is even a nod to the First World War poets in his sensible older son, Edward, and Jack Quarton makes a grand job of fledgling writer with his head in the clouds, unaware of the devotion of down to earth teacher Edie (doggedly portrayed by Sophia Hatfield). Then we have the volatile and tactless mill girl Susie (Lauryn Redding) as her foil. And a similar role is fulfilled by Elizabeth Eves as the forthright Alice confronting Farrar in one of the most humorous scenes, when her chickens ruin the flowers intended to decorate his hat, a vital part of Morris Men costume. Their passionate interaction risks overshadowing the starcrossed lovers but the rather bumptious Frank and feisty Mary manage to hold their own. Indeed, each cast member makes a valuable contribution, no matter how small: Ben Burman (William Farrar), Andrew Whitehead (the Bagman and Jim Haworth); Russell Richardson (Edie’s Grandad, Dick Shaw, Farrar’s friend and ally). And Brett Lee Roberts as mill worker Alan Ramsden runs the gamut from harassed family man, whom Susie accuses of cowardice, to expert dancer, whom Rutter, with lovely irony, accuses of being ‘a touch fulsome’.

This is a play which is a beautifully poignant memorial to the Centenary of World War I; drama, songs and dancing, laughter and tears, are all in the great tradition of Northern Broadsides. You couldn’t ask for more.