You are currently browsing the monthly archive for December 2013.

END_OF_DOCUMENT_TOKEN_TO_BE_REPLACED

Runs mainly from December right up to the end of March,
and beyond in some cases

Once Upon A Time,

there lived a writer, and they won an award,

and so they lived happily ever after…

# THE MANCHESTER WRITING FOR CHILDREN PRIZE 2014

Details on website; postal entry pack can be downloaded.

And across the seas to Ireland we go for plenty of variety from Fish, Limnisaand Ó Bhéal –
further afield yet, when it’s translations for John Dryden.

With big prizes when writing for little people (not leprechauns, children):Manchester

Back home, Second Light offer an anthology of women’s writing
Her Wings of Glass, and Oxford have an MSt in Creative Writing

Here comes some poetry in the fast lane: Slipstream, or Frogmore, Southport, Ver and Ware, which you could match, with York/YorkMix, David Burland and Poetry Space

Expanding into short stories, we’ve got
Henshaw, Chapter One, Mslexia and Verulam
Or bridging the gap: Bridport and Biography from Earlyworks

or as yet unpublished, by a Scottish poet aged 30 or under:

currently resident in Scotland for the last two years.

Three copies to be submitted by poet or publisher

‘Is that a pipe in your pocket or are you just pleased to see me’ is of course the kind of thing you would never ever hear in a panto – oh no you wouldn’t. The Unity after all is known for the moral of its tales, and the originality of adaptations. OK, there’s a wee bit of tampering with the ending, although there are various stories and some quite sinister since he’s the Rattenfänger,and in one version, the children have departed with their families, not disappeared – or maybe not, since they have gone to to Transylvania… it’s poor little Orphan Annie kind of thing rather than a little boy but this is one seasonal production which rarely fails to deliver the goods: charming, inventive and completely heartwarming, mastering the art of entertaining the entire family.

Basic scenery and costumes are put to good use with a variety of ingenious touches: the video backdrop and coat rack for props may now be virtually inevitable but the bonus is in the detail, for example, the village of Hamlin cunningly represented by a large mobile. And the songs are brilliant, whether jaunty or poignant – the music, of course, is most enticing.

The cast on the whole are exceptional, with laurels for a hilarious gruesome twosome: super slick mayor (Nathan Smith) and his dozy sidekick, Slime (Emma Hirons). However, while James Micheal Doolan does appear otherwordly as the Piper, he occasionally gives the impression of trying too hard, though the rest of the cast slip easily into their various roles: first rats, then villagers, mad scientists and so on; Edwina Lea is appealing in the pivotal role of the orphan, with a lovely singing voice.

A genuine Christmas treat, the message as ever: you mustn’t miss this magical show.

END_OF_DOCUMENT_TOKEN_TO_BE_REPLACED

An addition to quite a tally, including 2nd in the 2012 Cardiff International Poetry Competition 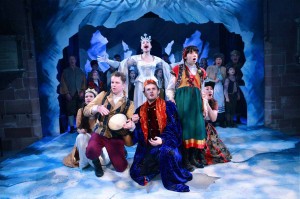 An interesting choice of Christmas show to play in a church: very gothic.

END_OF_DOCUMENT_TOKEN_TO_BE_REPLACED

December 2
Just a reminder that this is the deadline for online entries
www.poetrybusiness.co.uk/competition