‘Now that’s what you call theatre.’ Eithne Brown declared, and who am I to disagree, though perhaps a few quibbles…

The set is certainly evocatively grim, cavernous and bleak, the atmosphere intensified by the use of solemn song and discordant music. Likewise, by the ominipresent cast, who frequently comment – not so much Greek chorus but voices in Raskolnikov’s head, a student as anguished as Hamlet, or that invisible but always audible, invariably critical, audience, in front of whom many of us seem to perform our lives.

The tension arises from his reasons for and concealing of the murder of the ‘loathsome’ pawnbroker, and also from his relationships: those who adore him: mother, sister and the prostitute, Sonya Marmeladov, and her drunken father; George Costigan, who is also a regular scene stealer as the sinisterly camp police inspector, Porfiry Petrovich. 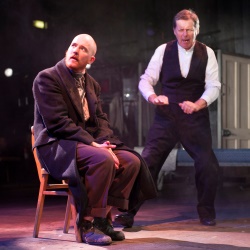 Adam Best is undoubtedly stunning as the antihero trying to communicate his inner turmoil although at times, overshadowed by the heavy Irish accent and undertones of stand up comedian, a role actively portrayed by other characters in certain parts.

And it’s unfortunate that some of the women’s roles are difficult to untangle, with little help from the programme. At the end, it seems that the mother has been sacrificed for Marmeladov’s widow, although Cate Hamer’s is a poignant portrayal. Similarly, Jessica Hardwick as Sonya and Amiera Darwish as Donya. The faintest ray of light is her switch from the horrendous Luzhin (Jack Lord) to Razumikhin (Obioma Ugoala), whose description of his friend Raskolnikov does not accord with his own perception. It also echoes ours, in the scenes where he comes to the aid of the Marmeladov family.

An exceptionally powerful play, even for those who cannot completely engage with it; the audience’s rapturous response will prove you wrong.